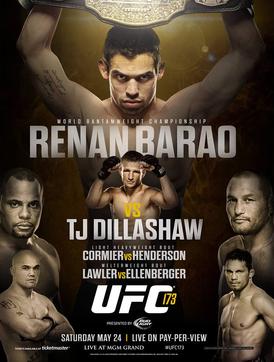 Here are my predictions for the main card of UFC 173

Krause is boast an impressive record of 25-5, but has had mixed performances in his two fights in the UFC. After beating, the hard hitting, Sam Stout at UFC 161, he lost a controversial decision against Bobby Green in November 2013.

The former WEC Champion, Varner, has lost his last two fights in the UFC. However, he looked good in both fights and they were against very tough opponents. He will come into this fight with a lot more UFC experience than Krause, and is fighting for survival.

This is a close fight that could go either way.

Both these fighters are ranked among the top 10 Bantamweights in the UFC and are very evenly matched in terms of skill set.

This should make it a very interesting fight, but I think Rivera’s power could make all the difference. Of his 10 wins he’s holds 7 KO’s.

This will be Lawlers first fight since his war with Johny Hendricks for the Welterweight crown. He takes on No. 5 ranked Jake Ellenberger.

Ellenberger’s best chance of winning will be if he can out wrestle Lawler and keep him on his back. However, if he decides to trade punches with Lawler, as he has done in his last few fights, it will end badly for him.

This is a great fight for Cromier and if he wins it, he could be in line for a title shot. Cromier has ever improving striking and great wrestling which he combines very well.

But don’t count Henderson out to quickly. All he needs to do is land his overhand right and the fight will be over.

Stylistically this is a Cromiers fight to lose.

This seems like a very one sided fight on paper. Barao has convincingly beaten Dillashaws teammate, Urijah Faber, not once but twice. He has shown he has the tools to beat this style of fighter.

Dillashaw is an excellent fighter and has looked great in his last few fights most recently beating Mike Easton via decision. However, I don’t think he possesses the skills to neutralise Barao

Here is the UFC 173 Extended Preview

For more information on mixed martial arts training in Plymouth call 01752 262233 or visit https://martialartsplymouth.co.uk/mixed-martial-arts/ and take advantage of our FREE Trial offer.

Try our Kids Classes for 30 Days for FREE?

My little boy hasn’t spoken about anything else…